This year we flew through New York to Barcelona and stayed at Catalonia Hotel near the port of Barcelona.  It was a beautiful day and as it was nearing lunch we wandered towards the port and over to the old area called Barceloneta.  This is the area where the fishermen come in each morning with their catch.  We left the tourist restaurants on the port side and walking inland we sat down at a local’s restaurant.  The mussels were delicious as were the sliced sausages we bought in the adjoining market after being served a sample.  Back at the hotel we stopped for a glass of wine at the small bar by the lobby. We then took our glasses up to the pool deck, a great way to relax after our long flight hours.  After a good night’s sleep, we were ready to explore the city.

La Rambla, the famous walkway and only a block away from our hotel, is where we started our day when we “rambled” along with no agenda.  Antoni Gaudi is Barcelona’s artist and architect leaving his mark on the city, especially on the Sagrada Familia Basilica, still unfinished, and also seen in his houses and in Park Guell. As we were walking, we saw a statue of Gaudi, all in green, with a can on the ground in front of him.  A young girl tossed a coin in the can and he became alive and hugged her!  What fun this day was going to be.  We stopped in Park Reial for a light lunch, and it began to hail!  Fortunately, we were covered by an umbrella and were able to enjoy our tapas.

Some great music was coming from inside the restaurant, so we stepped inside and were delighted with the lively music from the band accompanied by a great female singer.  The patrons were dancing besides their tables. Further up we continued our rambling and entered Supermercat Boqueria, has to be the one of Europe’s largest inside farmer’s market.  You could spend hours there and you might get lucky enough to get a seat at one of the several bars but tasting as you roam from one stand to the next is just as fulfilling. Continuing our walk on La Rambla  we stopped at the Bibe Catedral Restaurant for a couple more tapas, resting up before walking through and enjoying the winding roads and the ancient buildings. Next to our hotel is a pastry shop and we finished our wandering with coffee and a chocolate croissant. 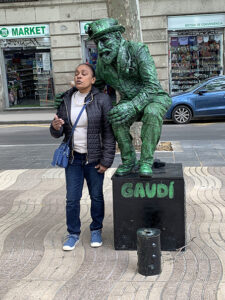 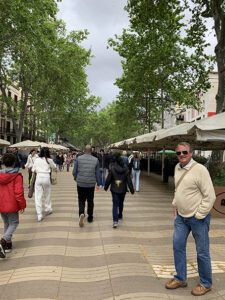 Sagrada Familia is a site that should not be missed.  Being adventurous we decided to walk the 3 miles to get there, and it was worth it, especially walking through the park with the Arc de Triomf.  This basilica was started in 1882 and Gaudi took over in 1883 as the architect.  It is an example of Gothic and Art Nouveau style.  He devoted his life to it and is buried in the crypt.  The construction of the basilica is still ongoing.  There are tours of the inside but after that long walk and taking many photos of the outside we decided on a taxi ride back to Barri Gôtic (Gothic Old Town area) to Santa Maria Catedral.  This beautiful cathedral required more photos. Then we wandered over to a plaza ready for more tapas and good Catalonian wine. It was time for an afternoon rest by the pool.  That evening we sat at a nice restaurant on La Rambla sipping Spanish wines and enjoying watching the people strolling by. 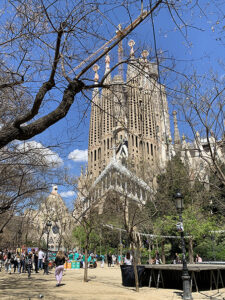 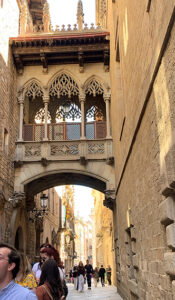 Our last morning in Barcelona was spent visiting the Maritime Museum of Barcelona.  It is located in the Royal shipyard opposite the 60-meter Monument to Columbus at the lower end of La Rambla.  The museum traces the history of the port’s shipyard going back to the 13th century that originally was used for building warships. It is an exhibition of the culture of the maritime history of Catalonia.  Housed are models of the ships, navigation instruments, figureheads of the sailing ships with interactive activities.  Of great interest is 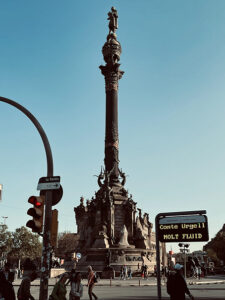 seeing the full-sized replica of the 60-meter long Royal Galley from the 16tth century which defeated the Turkish armada.  You can walk around it on different levels.  It is an awesome sight. There is an attached great restaurant to visit afterwards.  That afternoon we wandered around the port and viewed the boats in the marina.  There are bicycle riders with chariots attached to take you for a ride around the port.  Be careful and check before you get on for the price and destination.  There is a lot more to do in Barcelona but not enough time on this trip. 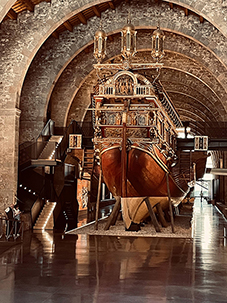 View some videos from our trip here.

Scramble the Seawolves – Can you spot
Frank in the movie?

Welcome to Our Travel Blog

Paula Lorentzen is our real estate Professional.
Check out our listing here.